As you might see, the world is entering into a global war. And you might ask yourself: How this happened?

Well, as an Austrian Writer, living in the Tyrolean Alps and dedicated to selling some water to the Canadians, living in relative neutrality, it is my duty to inform you about the current situation happening in the Globe.

Chapter 1: The born of the Canadian Empire, and the USA-Partition.

As you should already know, the USA has been divided between some countries. And how happened? You might Ask.

Well, in that moment, a new country was born: Canada.

Canada born from a group of Russian players, who at the same time, was rounded by MichaelPlays. The Founder of Russia, and then Canada.

He was in exile from Venezuela. and decided to create a new adventure. In his adventure, he brought some people with him, and had a war with another state commanded by another Venezuelan: Kazakhstan. Eventually with the support of the High Republic, he finally succeeded. And the country was growthing.

But the space was very limited, so the new community decided to move to the Americas and found a new country: Canada.

Of course, for gaining space in Canada, they needed to defeat another country that was owning Canadian territories: The United States. And with the support from HR again, and from this humble Austrian President, Canada declared Independence from the United States and absorbed some of their territories.

Then the war moved into Original American Soil.

The United States was basically diminished from its original territories as Mexico, Colombia, Cuba, and Centralamerica had some foot there. Also with South Korea and Venezuela.

Eventually South Korea was kicked out, and Colombia dissolved. Leaving the USA-Partition like this: 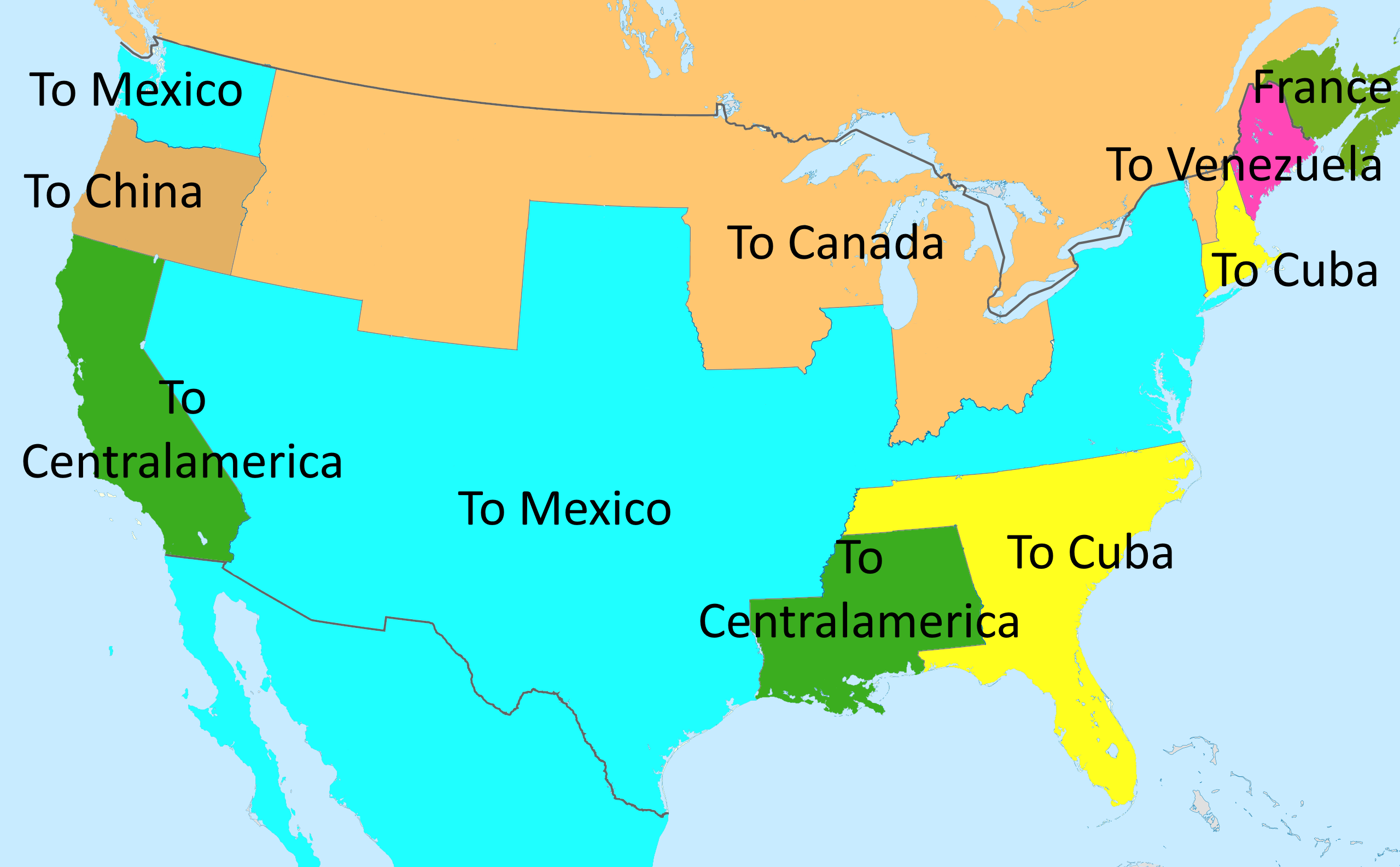 When Canada invaded American Soil, Mexico decided to join them and eventually absorb more land from the Americans.

Then the USA collapsed, therefore, Canada and Mexico got more American Land, which Eventually reaffirmed the power, not just from Canada, but also from Mexico, which eventually became more relevant after the events of the Canadian Foundation. Eventually, Canadá (And Mexico) kicked out South Korea from the Americas, and Colombia also collapsed from the expansion of Centralamerica.

Chapter 2: The Mexican Manifest Destiny: The Massacre of Illinois, and the harassment of Poland.

The Mexican Expansion created some issues with the Polish population in Illinois, an American Territory who became part of the Mexican Empire, all by the Mexican President, Le Bizarro.

The aggressive destruction of the American nation had caused some rebellions in the USA by Polish Population as they lost most of their material possessions. By this situation, Mexico had been trying to control these rebellions by moving it’s polish population to a Polish Ghetto in Illinois for better vigilance. The Polish government protested against this issue, and as a response, Mexico supported Danish Resistance in Poland.

So, the words became the proxy wars...

Chapter 3: The provocations and the chain of war.

Due to the friction between these 2 powerful nations, Morocco decided to support its ally Poland by sending a diplomatic message. And the Western Guard (Mexico’s Alliance) did the same for Mexico. So China (Morocco's Ally), began the Second American partition war against Venezuela, so as a Response, Venezuela launched an attack on the Chinese tradepost in South America. So, the 2 biggest alliances began to fight each other.

Morocco then sent a maritimal float to the Mexican North American Colonial Coast. And by surprise, Rwanda declared war on Mexico.

Some movements were done by Western Guard, as Mexico oppened the African Front, and Mauritania joined to the US Expedition

As this is the first global scale war, we are not sure how it will end, but there is something sure: The world will not be the same after this. So let's see what happens.


With nothing else to add...